New addition to the Resource Park

Samherji fiskeldi ehf. has entered into agreements with HS Orka for the development of land-based salmon farming in the Resource Park by the Reykjanes Power Plant. The goal is to produce a wholesome quality product with a low ecological footprint. The company has secured access to sea and electricity to produce up to 40 thousand tons of salmon on land annually. Warm seawater will be used in the production, a resource stream from the cooling of the Reykjanes Power Plant. Samherji fiskeldi has also reached an agreement with landowners for the development. 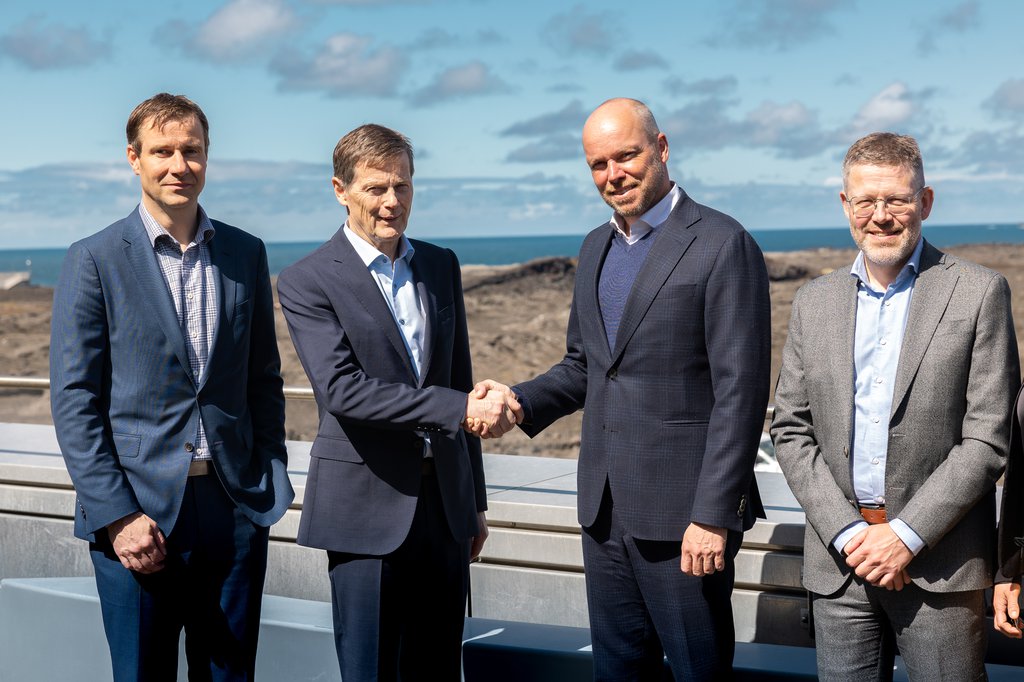 Samherji fiskeldi plans to build land-based salmon farming facilities with the capacity to produce up to 40,000 tonnes of salmon in three phases over the next eleven years. The land-based salmon farm will be located by the Reykjanes Power Plant and will consist of a hatchery, an ongrowing farm, a processing house, and service buildings. The total investment is estimated at over ISK 45 billion. The board of Samherji has decided to provide funding for the first phase of the project, but it is planned to seek funding from investors for further expansion of the facilities. The fish farming plans in the Resource Park are considered significant compared to other aquaculture projects currently being prepared in Iceland and internationally.

Preparations for the first phase have begun

Work on the assessment process, licensing and design has begun and is scheduled to be completed next year. According to Samherji's plans, juvenile production will start in the first phase in early 2023 and continued farming and processing of products in 2024 and 2025. In the first phase, 10,000 tonnes of salmon will be produced, with an estimated investment of ISK 17 billion. In the second phase, 10,000 tonnes will be added, and in the third phase, 20,000 tonnes. If everything goes according to plan, the land-based farming in the Resource Park will be at full capacity in the year 2032.

Samherji fiskeldi, a company within the Samherji group, already has some activity in the Southern Peninsula region as the company operates a processing plant in Sandgerdi, a farm in Stadur by Grindavík and a farm in Vatnsleysuströnd. In addition, the company has a salmon farm in Núpsmýri by Kópasker and a hatchery at Núpar in Ölfus.

"With this agreement between HS Orka and Samherji fiskeldi, one more company is added to the diverse operations that already exist within the Resource Park. We welcome Samherji's plans for the Reykjanes Power Plant industrial site with the aim of producing a wholesome, quality product with a low ecological footprint. The Resource Park's ideology is precisely to promote better resource utilization. In this project, seawater from the Reykjanes Power Plant will be used to ensure a constant ideal temperature for fish farming. Finally, it is gratifying that with these plans, activities in our area of operation will increase, whether in terms of increasing the number of jobs in aquaculture activities within the Resource Park itself or related industries in the Southern Peninsula."

"The management and staff of Samherji fiskeldi have worked hard to prepare this project in Reykjanes for almost a year. It is a big step for us to finalize these agreements and be able to start building the project. We have achieved good results in aquaculture on land, and this investment reflects the confidence we have in the continued growth of this industry. We are excited to build in the area and enjoy the benefits of close proximity to HS Orka and the Reykjanes Power Plant. In this area, there are some of the best conditions for aquaculture we have seen. The utilization of warm seawater flowing from HS Orka's power plant is a major factor in making this project feasible. Not least, this is a very environmentally friendly production which the market is demanding."

"The development of land-based salmon farming within the Resource Park is the result of the utilization of Samherji fiskeldi's and HS Orka's knowledge in very different areas. When combined, we consider it efficient to develop extensive land-based fish farming, which surely must be considered important news. These investments will also create dozens of jobs in Reykjanesbær and the Southern Peninsula region and significantly increase Iceland's export revenues. The Board of Directors of Samherji has already agreed to contribute ISK 7.5 billion to this aquaculture project to ensure the development of the first phase. In my opinion, it shows the confidence we have that this is the right path to the future of food production and value creation. At a later stage, we will look for more investors to ensure the complete structure of the project."